Pixelmator Pro now has a brand new color picker, designed to be incredibly powerful and full-featured, yet amazingly easy to use.

We love the Colors window, so why did we decide to make our own color picker? Well, for an app like Pixelmator Pro, it falls a little short in a few small ways. And those small things often make a big difference.

We wanted to give you an easy way to pick colors using the classic hue, saturation, and brightness control, hex and and RGB color codes, and good old color swatches. And we wanted everything to be in one place so it’s all super easy to find. We also wanted to have a beautiful and informative eyedropper for when you’re picking colors from your image. And this is the result: 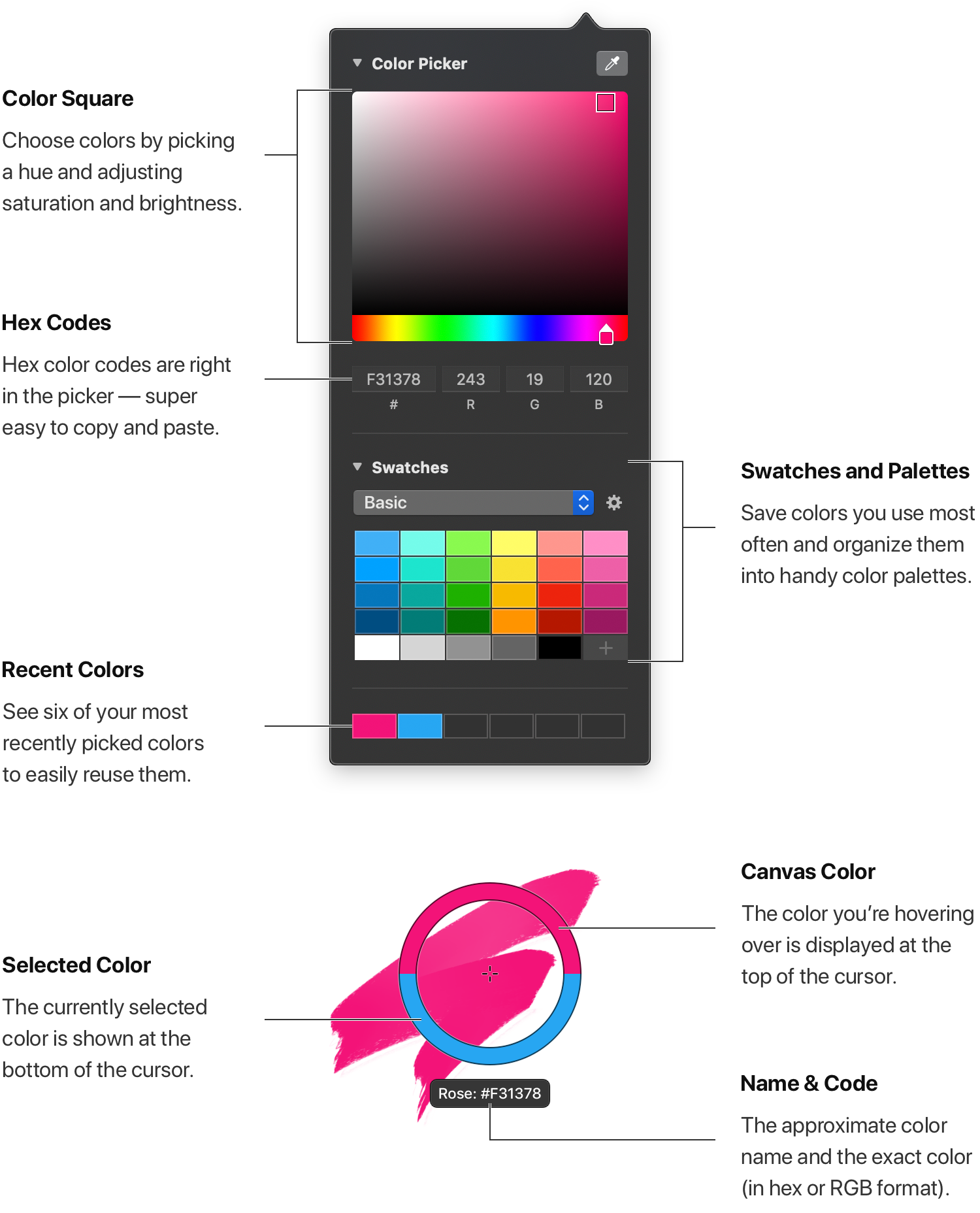 We’ve also added a dedicated Color Picker tool, where the eyedropper is always active so you can quickly pick a series of colors from an image. You can also customize how the eyedropper works everywhere else in Pixelmator Pro. For example, you can change its sample size (so it picks an average color, rather than an exact sample), change which color code is displayed, or turn off displaying color names. We hope you’re as excited about this new picker as we are!

This is another great improvement to make Pixelmator Pro even easier to use — you can now drag over multiple objects to select them. Hint: to make this easier to use with illustrations and other images, lock the background layer.

Whenever you open an image with fonts that you don’t have installed on your Mac, you’ll see a handy notification letting you know. And, using the Replace Fonts feature, you’ll be able to replace those missing fonts in a snap!

Performance improvements and other goodies

Along with all this, we’ve also included some performance improvements. The image overlay — which includes things like guides, selection outlines, layer handles, and others — has been rewritten to use Metal, bringing obvious speed improvements. What’s more, you can now press the Shift  – Command  – h keyboard shortcut to hide or show it!

We’ve also improved the speed of layer strokes, added the ability to apply inside and outside strokes to text layers, and made a range of improvements the the shape tools, making it easier to create illustrations and drawings. All in all, it’s a pretty awesome update, even if we do say so ourselves.

If you want to know every detail about the update, head down to our What’s New page, where you’ll find the release notes and more. Otherwise, visit the Mac App Store to make sure you’re all up to date. And don’t hesitate to let us know what you think!