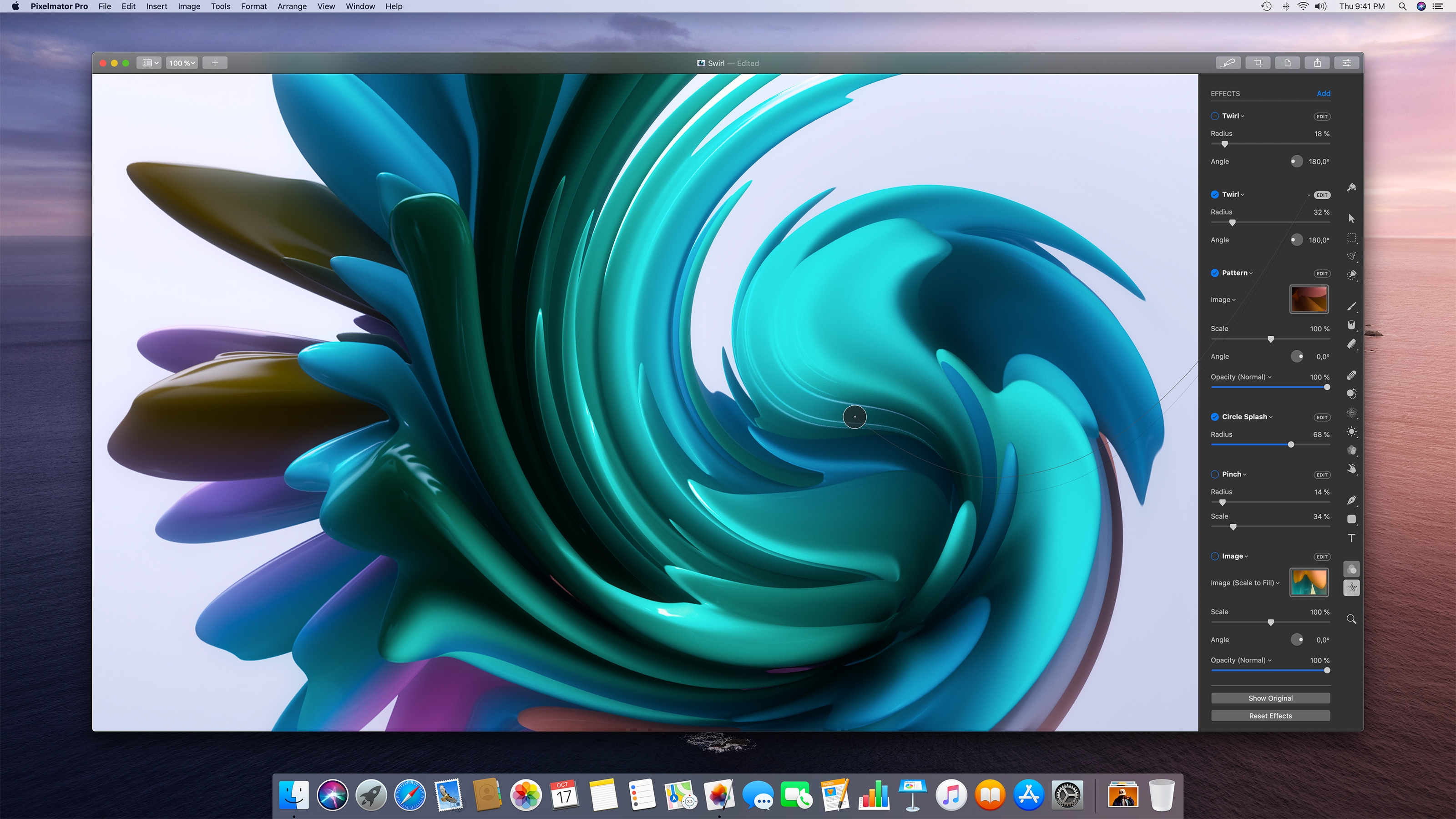 macOS Catalina Support
Pixelmator Pro is now fully compatible with macOS Catalina, including support for Sidecar and Apple Pencil, which means you can extend your desktop workspace using your iPad as a second Mac display! And with Apple Pencil support, you can paint, sketch, create graphic designs, and retouch your photos with pressure-sensitivity, acceleration, and tilt support as well as support for the double-tap gesture. Plus, as Pixelmator Pro fully supports Touch Bar, handy controls appear at the bottom of your iPad when using Sidecar — even if your Mac doesn’t have a Touch Bar.

Mac Pro
Thanks to its Metal-based architecture and GPU-powered editing engine, Pixelmator Pro absolutely flies on the upcoming Mac Pro. We’ve been able to optimize multi-GPU support so that with multiple graphics processors in Mac Pro, you’ll see big performance boosts in Pixelmator Pro. And performance increases even more with each additional GPU. For example, Pixelmator Pro applies the new Core ML-powered ML Denoise up to 2.5x faster and effects up to 2x faster on Mac Pro with 2 GPUs compared to iMac Pro.

EDR Mode
We’ve also added support for the upcoming Pro Display XDR. The display’s true 10-bit color depth and P3 wide color gamut are natively supported in Pixelmator Pro. And the new Extended Dynamic Range Mode lets you display clipped details in RAW photos. To do this, we use the display’s 1600-nit peak brightness to bring out details in the highlights without compressing the dynamic range of the rest of the photo, bringing a never-before-possible RAW editing and viewing experience.

Performance Improvements
Pixelmator Pro now has an end-to-end Metal pipeline for rendering and editing and a new asynchronous zoom engine, which brings some big performance improvements. Zooming and scrolling is now at least 10x faster and always responsive, effects are up to 2.7x faster, and painting is up to 2.4x faster!

SF Symbols
SF Symbols, the new set of over 1,500 configurable vector icons designed by Apple, is fully supported in Pixelmator Pro. So you can easily open SF Symbols templates, customize them to create your own symbols, and even drag and drop symbols right into existing documents!

This fantastic fifth major update to Pixelmator Pro is free for all existing users, so download it, try it, and let us know how we did. As you might guess, we’re already working on some more really incredible additions to Pixelmator Pro and we can’t wait to share them with you. Until next time!
0

I just got it via the Mac App Store. It was new enough that it hadn't appeared in my Updates list yet but it you look at the Pixelmator Pro page on the Store you should see an update button.
0

SUPERB and thanks st3f! Now the download link was there and I have updated!!!
0

The performance improvements are very noticeable. That’s really great. Ml Denoise I have to test a bit more but on optimised pictures it does nothing. I have to try it on noisy photos... I am really pleased how fast and deep the mac dns is implemented.
Communication wise I am looking forward to the next big update and that it was expressed in this blog post that they don’t let the fast and regularly update cycle slip.
As great Pixelmator pro is, I would love to see that things like layer adjustments, a history tool and soft proofing are implemented. The biggest area it could be pushed forward would be the text toll. Things like curved text and maybe using the Apple Pencil to write and that it recognises that it is a font which we could select (don’t know is that is possible).
Additional filters and effects would be awesome, .
0

About ML Denoise, if the algorithm doesn’t detect any noise or thinks that it can’t fix it well, it will do nothing so as to not ruin the image. In general, our approach has always been to make tools that won't distort or otherwise 'break' images, even under extreme conditions. It might be that this time we've been a little too conservative, but we have some ideas about how we could tweak the algorithm to make it a little more aggressive. For anyone who's not seeing great results, we'd love it if you could share some samples with us at support@pixelmator.com.

As for future updates, we've already started work on a few things and soft proofing is actually pretty much done, so that will be out in the not too distant future.
0 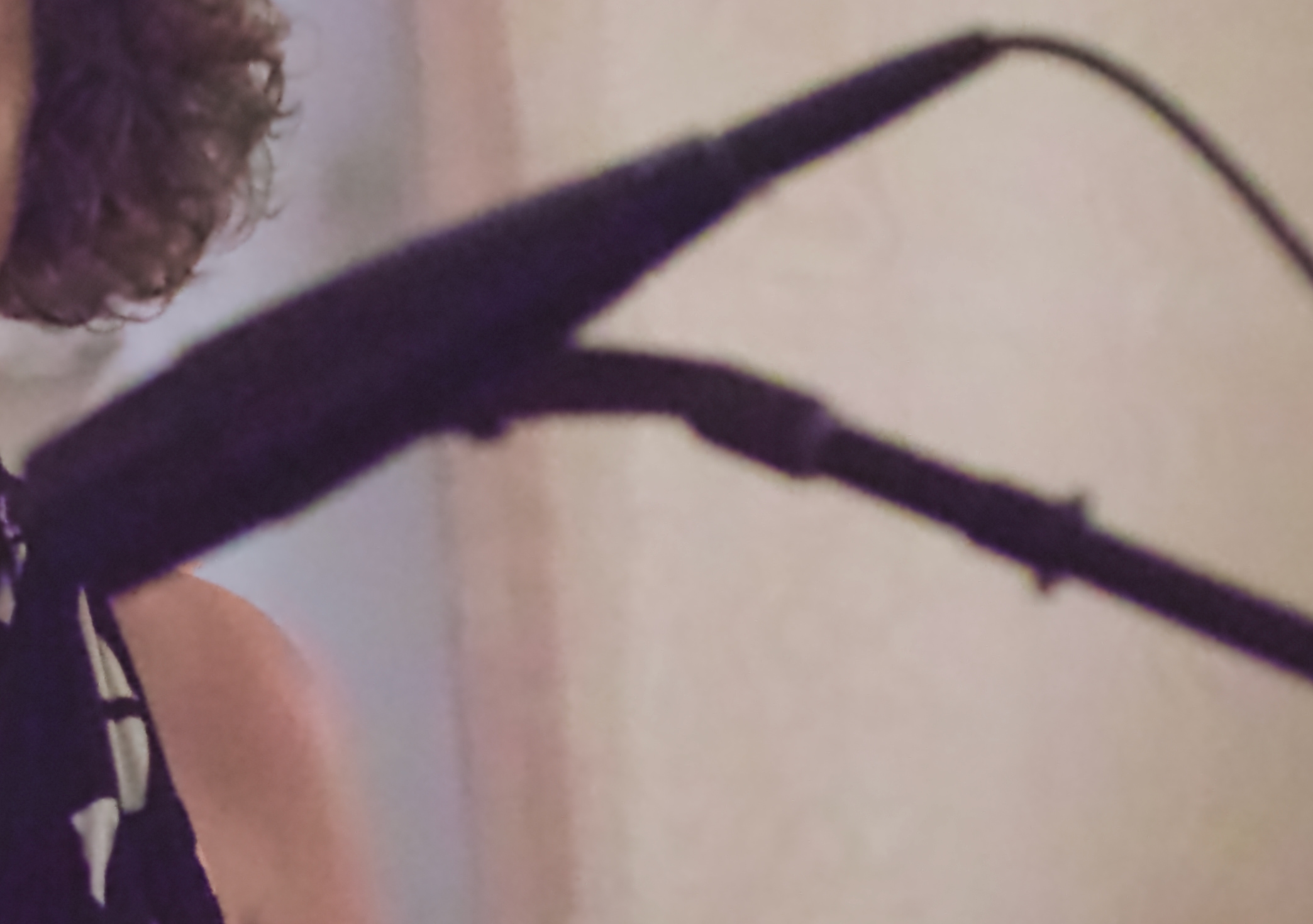 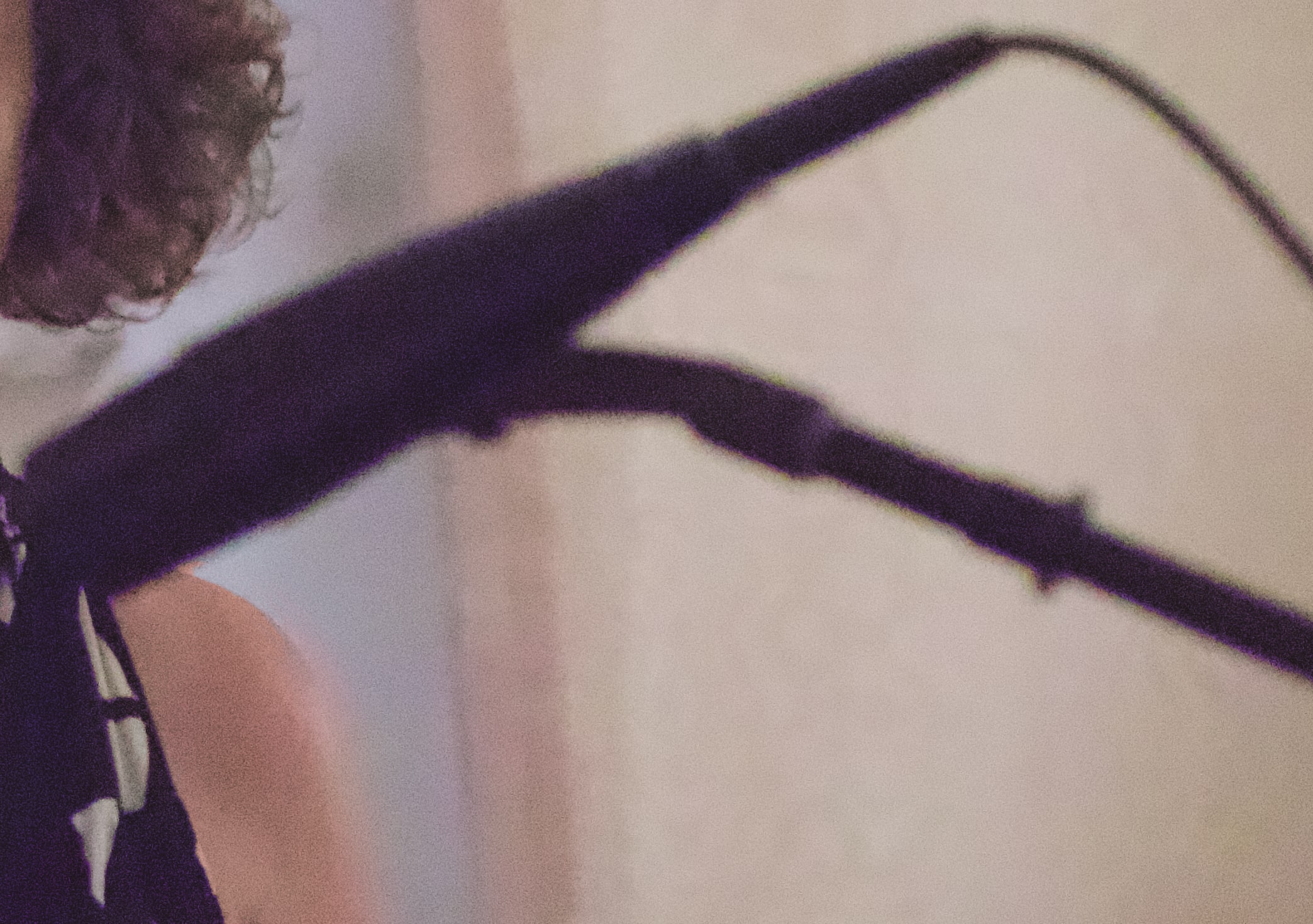 I have tested the denoise now on a raw image and exported it in jpeg with 98 % of export quality.

I think it does a great job of balancing out different factors - as Andrius already owned it - it could be a bit more aggressive.

I think that the main issue is not the ML itself but the fact that you cant tweak it to the users likings as it is with color adjustments for example. It should give a good starting point and in the test I did its quite good but in some other scenarios you need some sliders to customise it...
0

As we want the feature to be real-time (or as close to real-time as possible), a slider is a fairly difficult thing to add so we decided to, initially, release the denoising feature itself. However, we've been looking into this again after the release and there may be a way to make everything more customizable, so we'll work on it.
0

Did you also update the Apple Photos Extension?
I installed 1.5 Avalon, but the extension seems to be the same like before.
So I don't find the ML-Denoise for example...
0

Yes, the extension was also updated and should have all the tools as the full app — I can see ML Denoise myself. Could you send us a quick email about this at support@pixelmator.com? We'll investigate!
0

by Andrius As we want the feature to be real-time (or as close to real-time as possible), a slider is a fairly difficult thing to add so we decided to, initially, release the denoising feature itself. However, we've been looking into this again after the release and there may be a way to make everything more customizable, so we'll work on it.

thanks Andrius that you look into it again, I believe the slider is necessary to make this a really useful feature, at the moment it feels about but limited to be honest. I appreciate that you have realised it... it needs just a bit more tweaking...
0

Can you give us a hint on how we should use SF Symbols with it?
0

There are a couple of different ways! In each case, you first need to download the SF Symbols app.

Then, once you have the app open, you can copy and paste any Symbol from the app into Pixelmator Pro. This will add it as a text element, so you can use it in a design alongside text and when you change the size or weight of the text, the symbol will update as well.

You can also drag and drop Symbols from the app onto the Pixelmator Pro icon in the Dock to open them as vector shapes. You can add them to your Shapes palette and use them in designs as vector elements.

Finally, the most advanced use is creating your own Symbols to use in app development with Xcode. To do that, select a Symbol in the SF Symbols app, choose File > Export Symbol, and open the SVG file in Pixelmator Pro. You can then use the vector tools in Pixelmator Pro to customize those symbols according to the template, and when you export the same SVG file, it will work in Xcode just like the native Symbols do.
0