What an exciting week it was in San Jose! And not just because of our design award but also because of all the awesomeness announced at WWDC. A couple of the most exciting things are the new Mac Pro and Pro Display XDR, for which we’re already working on adding support. Today, we wanted to share a quick update about what exactly we have in store. 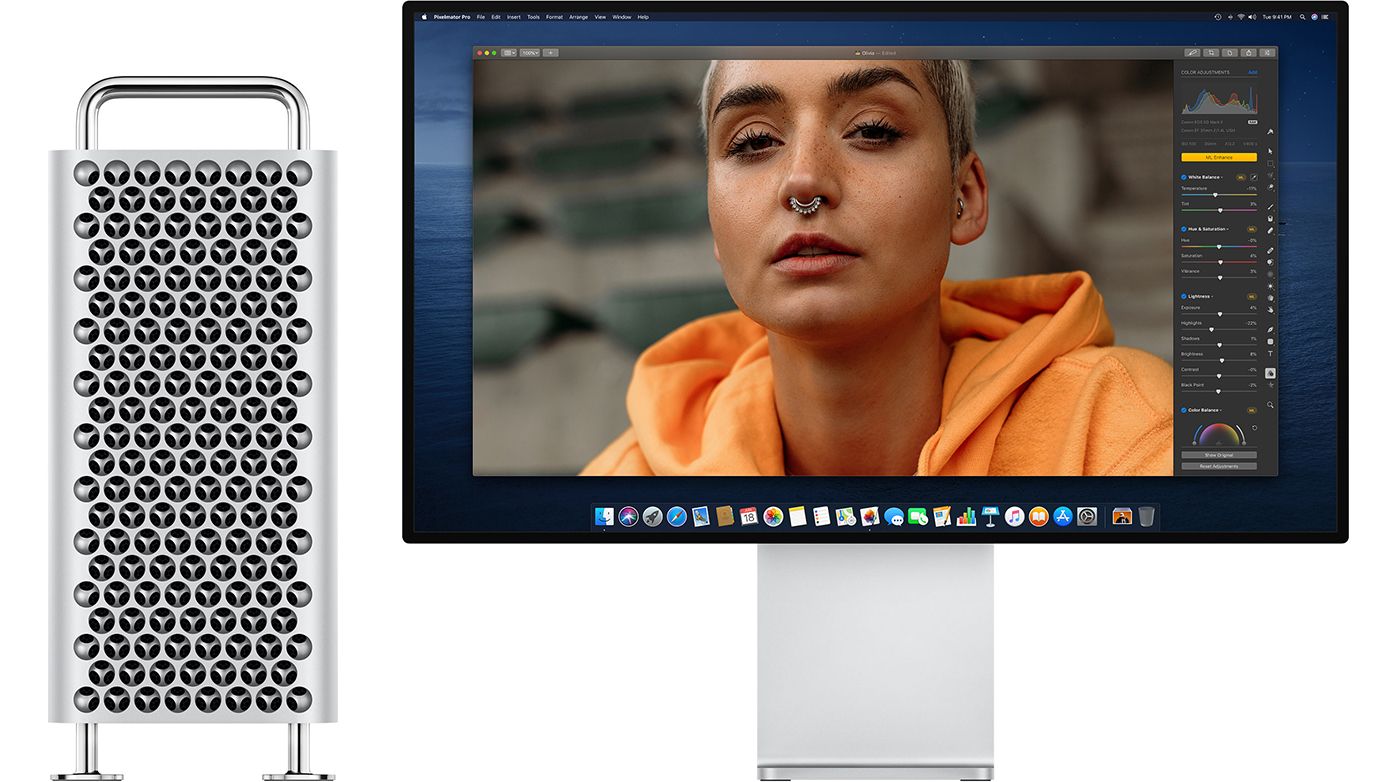 First, Pro Display XDR. For a quick bit of background, the XDR stands for extreme dynamic range. Thanks to the incredible hardware packed in the display, it can sustain screen brightness of 1000 nits, with a peak brightness of 1600 nits. In image editing workflows, this is going to be especially useful when editing RAW photos. All RAW photos have extended dynamic range that usually isn’t displayed, though you can make it visible manually. Often, this is done by compressing the dynamic range of the photo — making the brightest areas a little darker — because regular displays can’t show things like a really bright sky with all the details intact. With a future Pixelmator Pro update and Pro Display XDR, you’ll be able to see previously invisible highlight detail in RAW photos simply by turning on XDR mode in Pixelmator Pro without having to make any edits or changing the rest of the photo.

Of course, along with that, you’ll also be able to take advantage of the new display’s true 10-bit color depth (that’s over a billion colors) and P3 wide color gamut. Both of which Pixelmator Pro already supports thanks to its use of native color management. We can’t wait to get one of these displays for the office and see all this in action!

Mind-blowing device number 2 is the new Mac Pro. There aren’t really any superlatives that seem appropriate here but up to four internal GPUs with 128GB of high-bandwidth graphics memory? Up to 1.5TB of RAM? This thing is just insane for graphics work. And because Pixelmator Pro is built from the ground up on Metal, we can take advantage of all the power this new Mac Pro offers.

We’ll be updating our internal architecture to ensure overall performance increases significantly with each additional GPU, whether that’s internal within the Mac Pro or an eGPU. What’s more, Pixelmator Pro will be able to use the GPU connected to the specific display on which a document is open. So if you move a window from one display to another, all the data will immediately be transferred between GPUs.

Finally, Sidecar. Of course Pixelmator Pro will fully support Sidecar! Which is awesome for all you photographers, digital painters, and illustrators out there — you’ll be able to have an extremely powerful, accurate, and responsive graphics tablet with you at all times that you can also use as a secondary display. Pixelmator Pro will support pressure sensitivity, tilt, and acceleration of Apple Pencil when you paint and it will also support the double-tap gesture. Super cool all around.

These updates are lined up to be released late this summer and in the fall, before the new devices are available and in time for macOS 10.15 Catalina. And for now, we’re also working on finishing up the 1.4 major update that we teased a couple of weeks ago. Keep an eye out for news and sign up for our newsletter to make sure you don’t miss any big ones. It’s going to be a fun summer for us at the Pixelmator Team!