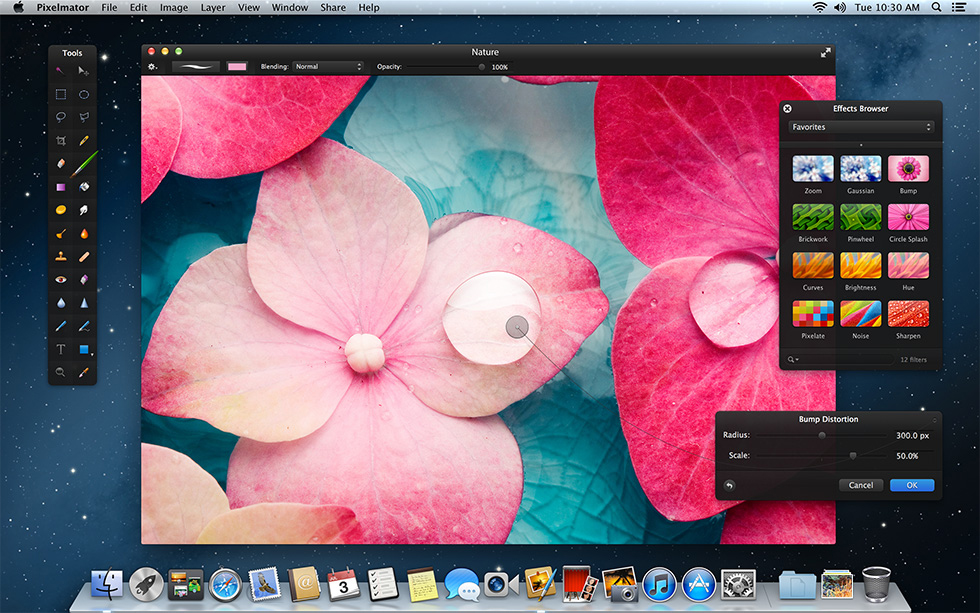 “Pixelmator continues to be a big hit among both professional and amateur image editors, and we’re thrilled to deliver even more features at a very affordable price,” said Saulius Dailide of the Pixelmator Team. “With support for Mountain Lion, iCloud and the new Retina display, Pixelmator 2.1 is ideal for Mac users looking to tap into their creativity with a full-featured, easy-to-use image editing app.”

The new Effects Browser takes the guesswork out of selecting effects by collecting, organizing and providing an animated preview of all of Pixelmator’s Color Adjustments, Blur, Distortion, Tile and dozens of other effects, together in one helpful palette. Users can also use the browser to tag and access Favorites in one place.

Pixelmator 2.1 also introduces several brand new effects, including the Vintage, Miniaturize, Black and White, Snow and Rain effects. With the Vintage effect, users get eight new photo filters that give pictures the look of old image processing and bring to mind photos from other eras. Meanwhile, the Miniaturize effect makes real-world scenes appear scaled down to size with a few clicks. It’s an optical illusion that gives ordinary objects in photos the endearing look of a toy model only inches tall.

Building precisely aligned image compositions is now short work in Pixelmator 2.1, with the new smart Alignment Guides. This new feature lets users position objects with pinpoint accuracy and build compositions quickly by using individual objects or image elements. The Alignment Guides gracefully appear and disappear onscreen as they are needed, while Object Spacing automatically shows when objects are equally spaced on the canvas.

In addition to full compatibility with OS X Mountain Lion, Pixelmator 2.1 comes with iCloud support, which automatically and effortlessly keeps Pixelmator work up to date across all of a user’s Macs; as well, complete Retina display support lets users fully enjoy image editing using Pixelmator on the new MacBook Pro with Retina display.

Pixelmator 2.1 is available exclusively from the Mac App Store for a limited-time price of $14.99—a substantial savings off the usual price of $59. It is also available as a free update for existing users.