Please bear with me as I struggle to find the correct terminology to describe my problem.

A standard feature in many painting programs has always been the ability to add one layer to another using a variety of different algorithms for combining the two pixels from the two layers. You could add brightnesses, subtract brightnesses, etc. I think I recall doing this with Pixelmator Classic. Now I am unable to find the means for accomplishing this. I'm sure it's in there somewhere, but I certainly cannot find it. Can anybody please tell me how to locate this feature?
0

You've got the full set of tools to change exposure, brightness etc in the Adjust Colors tool. Just click on Add in the top right to add another adjustment.

Your layer will still be opaque, though. If you go to the Style tool, you can change how the layer blends with the ones beneath. It's just by the opacity slider. Normal will be your normal opaque layer. Screen will (I think) add the RGB values together, which may well be what you want.

If you get this working for a night shot, I'd love it if you'd come back and share. I've never successfully shot a star-scape where the Milky Way is visible. I'd like to give that a go sometime.

Thanks for the help. I think I need to explain the problem more precisely. Here's a tiny portion of a photo I took last night with my iPhone: 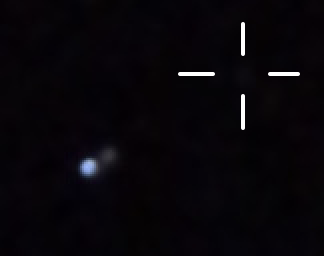 The trick in astrophotography like this is to combine multiple photos. It's called "stacking". The basic idea is simple if you think in terms of individual pixels. If I take two photos of the same stars, and add their brightnesses together, then the faint star's pixels will double from RGB (13, 11, 16) to RGB (26, 22, 32), and the star will be brighter in the resultant image. By adding together a bunch of photos, you can get a brighter, clearer image.

There are apps you can buy in the App Store that will do stacking for you, but I used Pixelmator Classic to handle this myself. I could also do a variety of other precise controls with Pixelmator Classic. Now I can't do any of that. I can't believe that such a powerful feature would have been simply thrown away. So the question is, where did it go?
0

To illustrate what I meant by blend modes, I grabbed your image, duplicated it five times and set all but the bottom layer to a blend mode of screen. Now I realise that this is pointless with the same image as I'm amplifying the noise as much as the image (and doing nothing that I can't do with the Adjust Colors tool) but hopefully it shows what I meant. 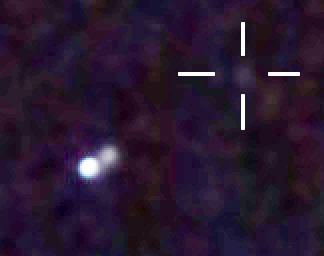 I would use a number of different blending modes, most commonly the "Lighten" menu item.

Is this feature no longer available in Pixelmator Pro?
0

It's all still around, it's just moved, and as of 1.1 it previews when you mouse over a blend mode : 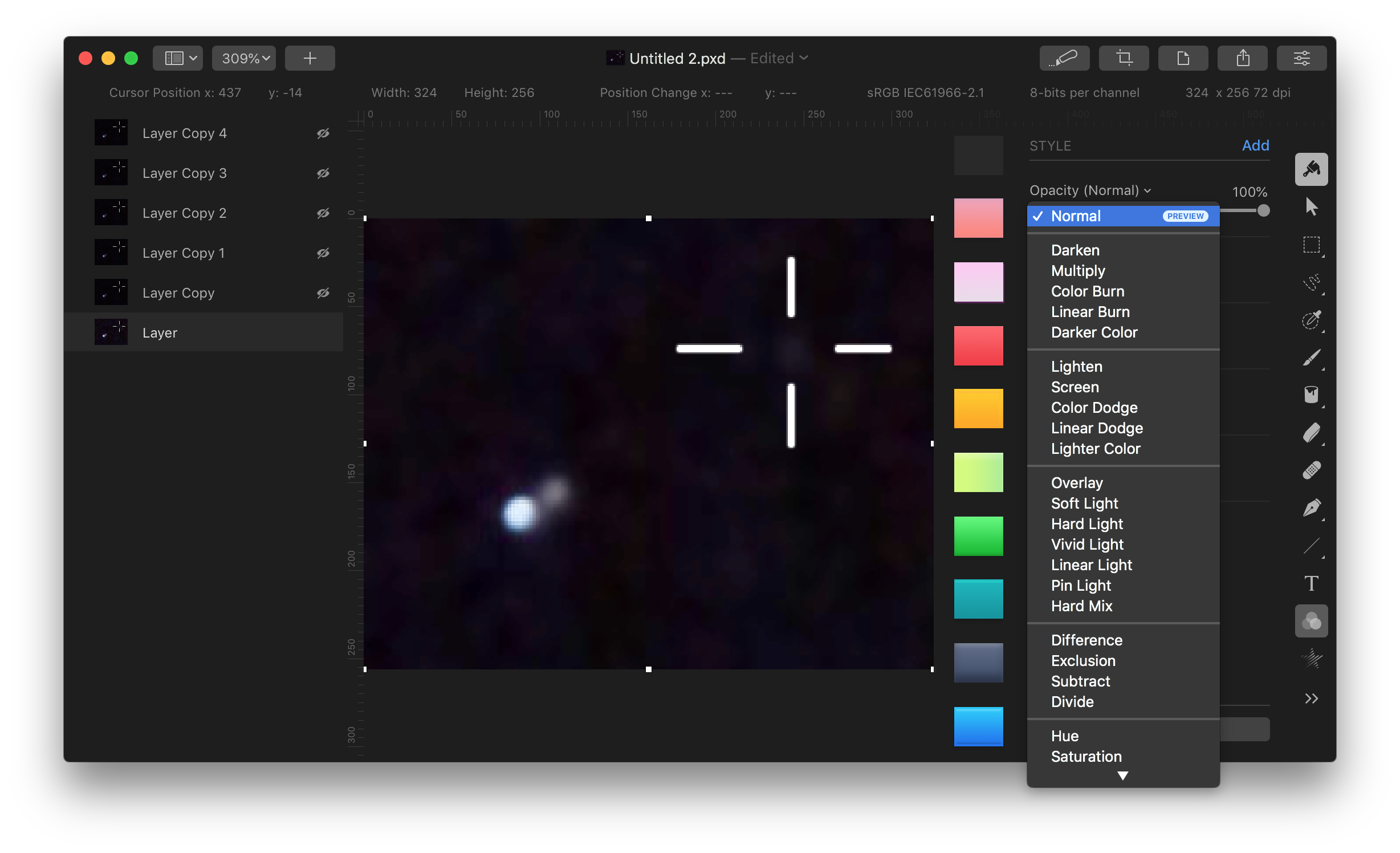 Ta-da! Thank you! I had dug deeper and found some more information but you are a step ahead of me. The trick is to left-click on the word "Opacity". Thanks again.

Now let's go murder the idiot UI designer who came up with that completely opaque scheme. 🤬
0

Oops! I owe the UI designer an apology. There is in fact an indicator of the popup menu:

Let's leave the UI person alone and step away from the bludgeoning stick. I really like the UI of Pixelmator Pro, but I recognise that not all will.

I think you might need another cup of coffee, though. An hour ago, I posted the following and you didn't pick up on it.


If you go to the Style tool, you can change how the layer blends with the ones beneath. It's just by the opacity slider. Normal will be your normal opaque layer. Screen will (I think) add the RGB values together, which may well be what you want.

Speaking of coffee, it's time I freshened my mug. Have fun with the images and, if you get a good result, I'd still love to see it.
0

I also appear to have broken the forum. I tried to edit my last post (I'd not seen your UI reply) and I can't.

Maybe the forum needs coffee, too.
0

Here's how stacking improves an image. The upper image shows the Big Dipper in a single frame. The lower image shows four stacked images of the Big Dipper. I didn't both to correct for rotation, so the stars on the right look like doubles. But you can clearly see that the stacking makes fainter stars easier to see. 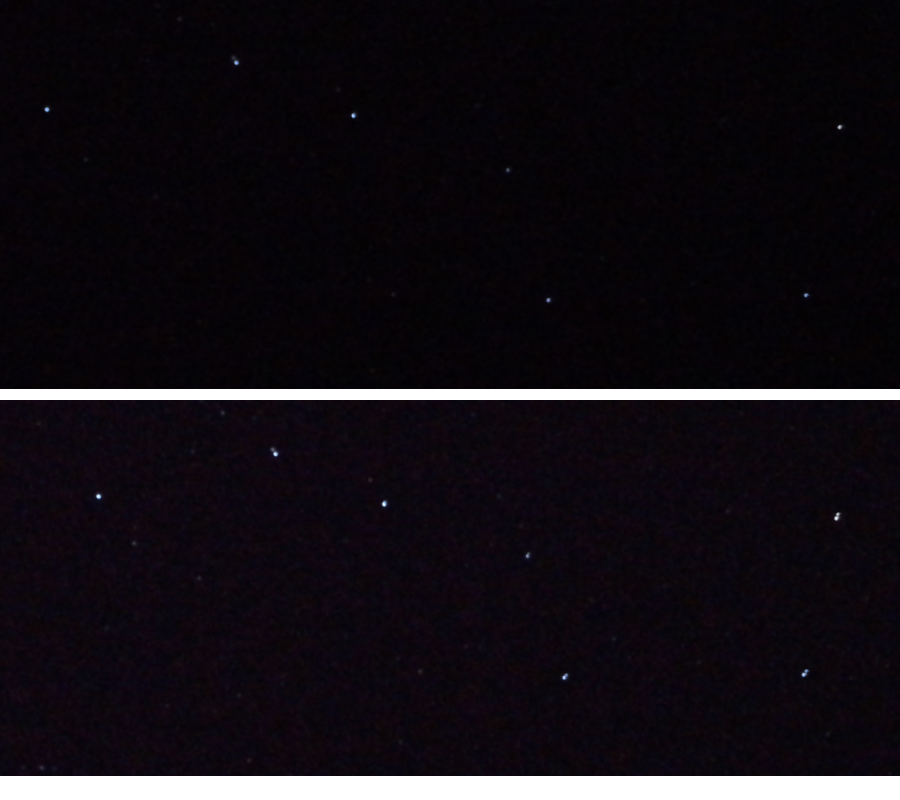 That looks cool. I'll be getting a new camera in a couple of months so I'll have to give that a go.

That reminds me. There's a Pixelmator Pro feature I was going to request: set centre of rotation. I'm guessing it would easier to rotationally align the images if you could align them by the brightest star then set that as point of rotation and spin the layers around that.

There's a catch with this kind of photography: you must be able to take long exposures. The frames used for the photo above are ten-second exposures with an iPhone 8. Most cameras will not permit such long exposures, because their internal software shuts down the exposure as soon as it thinks that the pixels might be saturated. I used a special app for the iPhone called NightCap that permits these long exposures. This allowed it to give better results than my Nikon. Those beautiful night sky photos you see are taken with high-end cameras that permit you to directly control the fine details and override the normal protections.

However, given my inability to figure out the features of Pixelmator Pro, it's likely that my Nikon could take fabulous photos but I don't know how to let it do that.
0

Thanks for the tips. I'll be upgrading my phone in a couple of months, too. I might have to grab myself a phone tripod mount and give that a go.
0