I have looked at several tutorials on this, but can't get it to work for me,

I have selected an object in a photo (seato in a motorcycle) and want to replace the color to match another color on the photo (leather bags).

When I drag the Replace Color palette to the selected area (seat) and drag the color bar, it blacks out the whole photo.

I have tried adding a new layer, inverting selection, but the slider bar still blackens the whole photo.

As well, i can seem to get any of the color to changed when I spin the color wheel.

What am I doing wrong?
0

I can't always get replace colour to do what I want (particularly if the colour is very light or very dark) but, if you post the image I'll see what I can do to help. 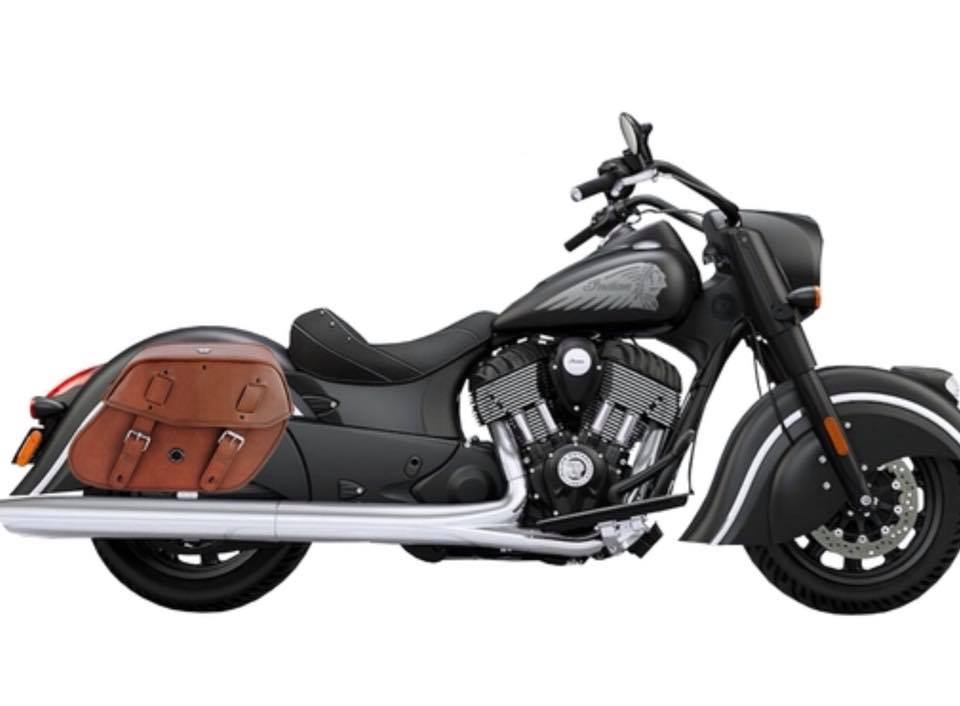 I appreciate your help, but of, course, i am trying to learn this and understand what I am doing wrong.

I am trying to recolor the seat to match the bags. Not sur if there is a way to do that and maintain the different shades and detail on the seat.
0

You'll probably have to do this in several stages, depending on the quality of image you need.

Let's start with quick and dirty.
The bodywork of the bike is a very similar colour to the saddle so try and separate them.
I'd use the magnetic selection tool to draw around the saddle. If the tool jumps when you are drawing, just move bac a way, realease the mouse and keep drawing. You should then be able to use replace colour, first selecting the seat, then the saddlebag.
0

I already selected the seat. It's the Replace color process that I am not understanding
0

I'll give it a go and will post screenshot.
0 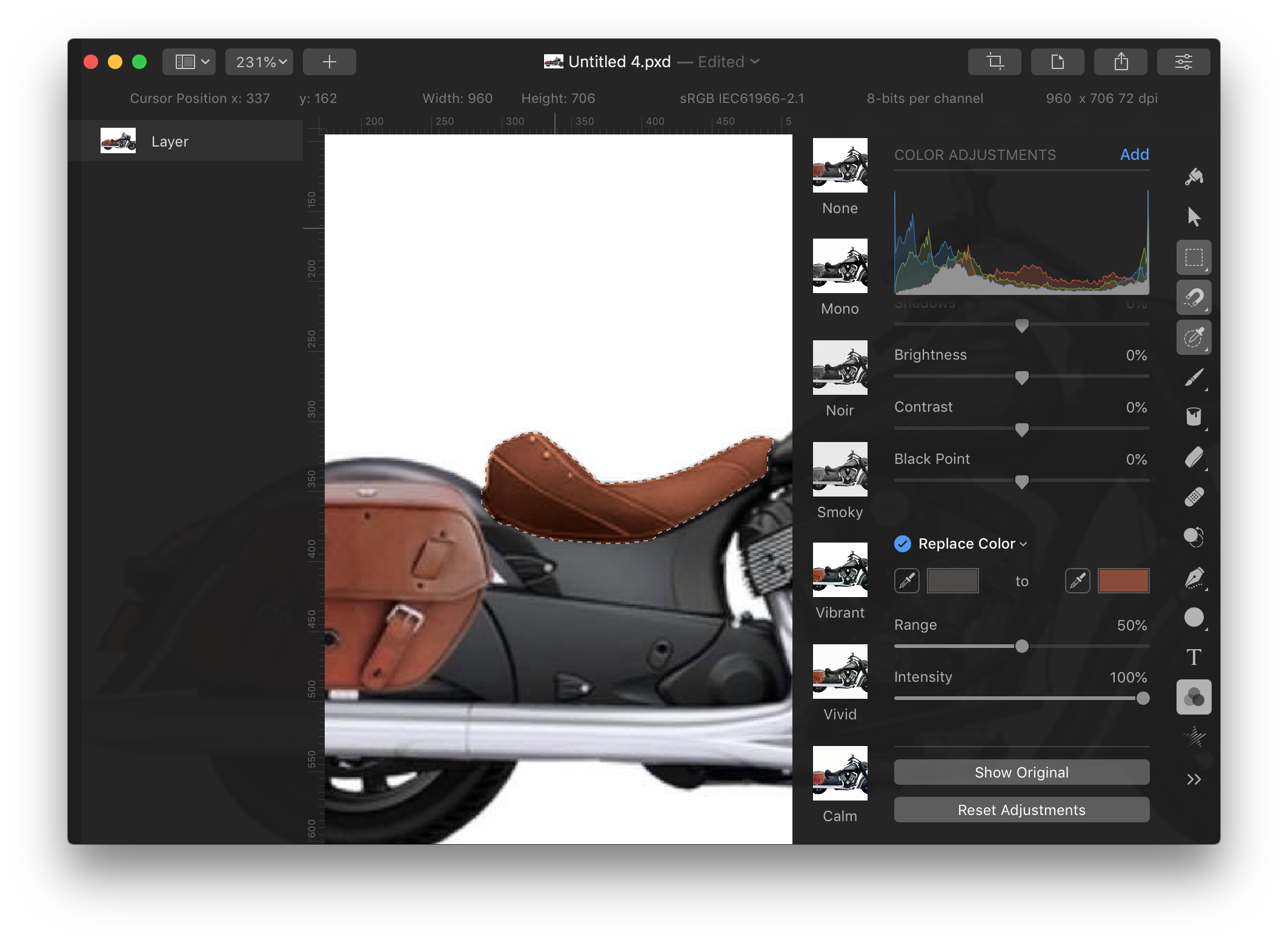 Thank you VERU much. Still, I am also trying to learn how the Replace function works. Have followed the steps on several tutorials but I cannot get it to do it at all.
0

No problem. I hope that helped a bit.
0

that was GREAT. Thank you. I still need to understand the process -=- not selecting and such, but how to get it to recolor.
0

Do you have the full image?
0

I mean do you have a full size of your modification?

Again, i appreciate you stepping in with great work. My question remains about process. I guess I'll keep researching but I cannot get the color wheel or anything else to change the color. Maybe it has something to do with layers but that is not in any of the tutorials.

I need a step-by-step., I guess I'll keep searching.
0

I didn't save it but it's only 2 mins to recreate it. I'm more interested in seeing why you're having problems.

The colour wheel won't work here. It can transform one hue (think rainbow colour) to another. The blacks and greys of the bike have no intensity (edit: oops 'saturation') so will not do much.

In steps to change the colour with replace colour it's:
1. If you have more than one layer, ensure that the one with the bike on it is highlighted in the layers palette on the left.
2. Use the selection tool of your choice (I recommend quick select or magnetic select to isolate the seat.
3. Select Replace color in Adjust colors.
4. With the first eye-dropper select a mid-grey from the seat.
5. With the second eye-dropper select a brown of your choice from the bag.
6. Dial the range up to 100%
7. Adjust intensity to taste.

What I'd do in this situation, as I consider replace colour a bit of a blunt weapon, is:
1. Create a new layer above the bike.
2. Set the layer blend mode of the new layer to 'color'. (It's in the Style tool just next to Opacity)
3. Choose your favourite paintbrush and any colour you like to paint colour on this layer (probably best it you use the eyedropper to select them off the saddlebag, though. ).

The reason I'd choose the second method is because the bag is quite mottled so it's lots of different colours. Painting on the layer allows to to pick all the shades off the saddlebag and add them where you want on the saddle.
0

Thank you. I will give both of those a try. I appreciate it.
0

Happy to help. Let me know how it turns out.
0

Just a quick question Skip, are you using the original Pixelmator or Pixelmator Pro? Because I'm getting a very strong impression that it's original Pixelmator. In which case, the Replace Color effect works a little differently to the way it works in Pixelmator Pro. Basically, every individual color in digital images is made up of a mix of the colors red, green, and blue. Replace Color (in the original Pixelmator and the equivalent tool in Photoshop, as far as I'm aware) works by redistributing the mix of those colors, which keeps the same saturation and brightness, only changing the hue. However, when you do this to white, black, or shades of grey (which have completely equal amounts of red, green, and blue), hue changes don't have any effect. For that reason, if you're working with the original Pixelmator, I'd use Stef's method — add an empty new layer, paint over the saddle, then experiment with layer blending modes to blend the color of the top layer with the textures of the bottom layer. In Pixelmator Pro, Replace Color has been improved and should be able to give you the results you're looking for.
0

For Pixelmator my instructions are as follows:
1. Create a new empty layer above the bike.
2. Set the layer Blending mode of the new layer to 'Color' (it's at the bottom of the Layers palette).
3. Choose your favourite paintbrush and any colour you like to paint colour on this layer (probably best it you use the eyedropper to select them off the saddlebag, though. ).