So there's this website where I download psd files to Dropbox and then that's where I import those into Pixelmator. The problem is they open up all the layers perfectly in photoshop but some don't open layers in Pixelmator and just turn it into a 1 layer picture. So is there any way aroundo this?
0

However, when opening a PSD-file with multiple layers, I can see the various layers but I cannot edit the objects, i.e. text, on those layers.

So, does Pixelmator Pro allow for the editing of multi-layered Photoshop Documents or not?
What does "supports" mean?

Somehow, I have not managed to find a clear answer to that question. Who can help?

I've found the people at Pixelmator to be quite responsive when emailed at support@pixelmator.com.
0 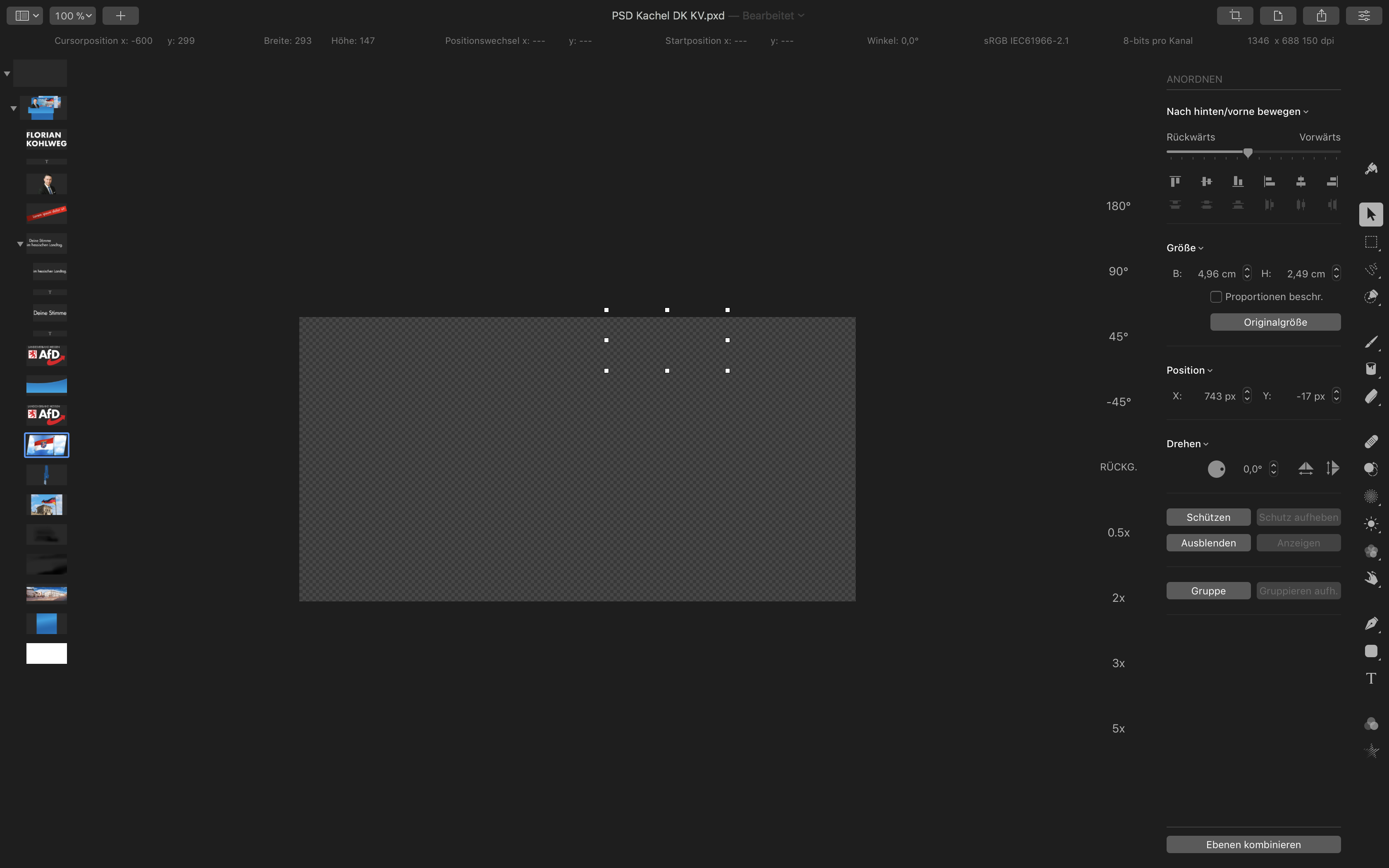 Sorry about the messy and now edited reply above. That image does not look good. Is it really not rendering anything?

Thanks. Now, can Pixelmator handle files like this or not? Sorry for being direct, but I bought Pixelmator Pro because I thought I could process PSD-stuff.

Can you share the PSD so that I can have a look? I'm really interested in the import of Photoshop files as it's something I may have to do soon. If you can't upload anywhere, I think you can post files at discord (https://discord.gg/wsJukbr) although I've not tried it with anything but bitmaps.
0

Am I assuming correctly that you are not with Pixelmator customer support?
0

I'm just an active user in the community forum. Customer support will usually engage in the forums but to guarantee a response email to support@pixelmator.com. I'm not sure if the offices are open today or not due to Easter holidays.
0

Great. Thank you. It's a legal holiday in Germany, too. I will get in touch with Pixelmator customer support tomorrow. I will keep you posted on anything I find out.

Thanks for your time and effort. H.
0

Thanks Heinrich. I'd really be interested in what PS features Pixelmator Pro supports on import.
0

After emailing support I have gotten an answer to my problem. It's because my device can't handle the file and pixelmator should fix it in the near future
0

I've just had a look at these cases and Conner's issue was a little different — that was related to opening PSD files on iOS. Because iOS devices have a limited amount of memory to work with (basically, there's no virtual memory), there's a limit on the size of images you can open, either in terms of the dimensions of the image or the number of layers (which contributes to the total size). When a certain file is over that number of layers but its dimensions aren't overly large, we can choose to open a flattened version of the image or not open it at all. Obviously, a flattened version isn't great but it's better than nothing. When the overall dimensions are too much to handle, then the image isn't opened at all. Heinrich's issue is with Pixelmator Pro and I can see the PSD isn't being opened correctly, but because it was over 20MB, the attachment was removed by the email server. We've now asked Heinrich to upload the file onto our servers and once we have it, we'll be able to say more about what's going on.
0

Yes, my support issue was answered and will hopefully be resolved in the future, but for now, I’m working with Pixelmator support on my problem and they are helping me out and have gotten me a version that works but it’s not a version I need. We’ll see what happens in the future.
0

OK, I've just noticed the main problem with that particular PSD file, Heinrich. The second-level layer group is masked and that mask is completely black (this is the bug), meaning it obscures the entire image. It appears that mask should be completely white instead. So, there are a few fixes for this:

P.S. The top-level layer group is locked, so make sure to unlock it if you'd like to directly move and edit the layers in the image instead of having to select them in the Layers sidebar.
0

The masks were the problem and I had not noticed that also the top layer had been locked.

Thank you very much for your extended effort and comprehensive assistance.

Hi,
How do you see which layer has the mask?
Thanks,
Josh
0

Choose View > Show List — in the Layers sidebar, the thumbnails to the right of the layer thumbnails are the layer masks.
0