We get asked this quite a lot — “So, what’s the difference between Pixelmator and Pixelmator Pro? I already have Pixelmator, why should I switch?” We don’t think a comparison table is the best way to explain the difference, but since it’s a pretty common question, we thought we should take the time to answer it. 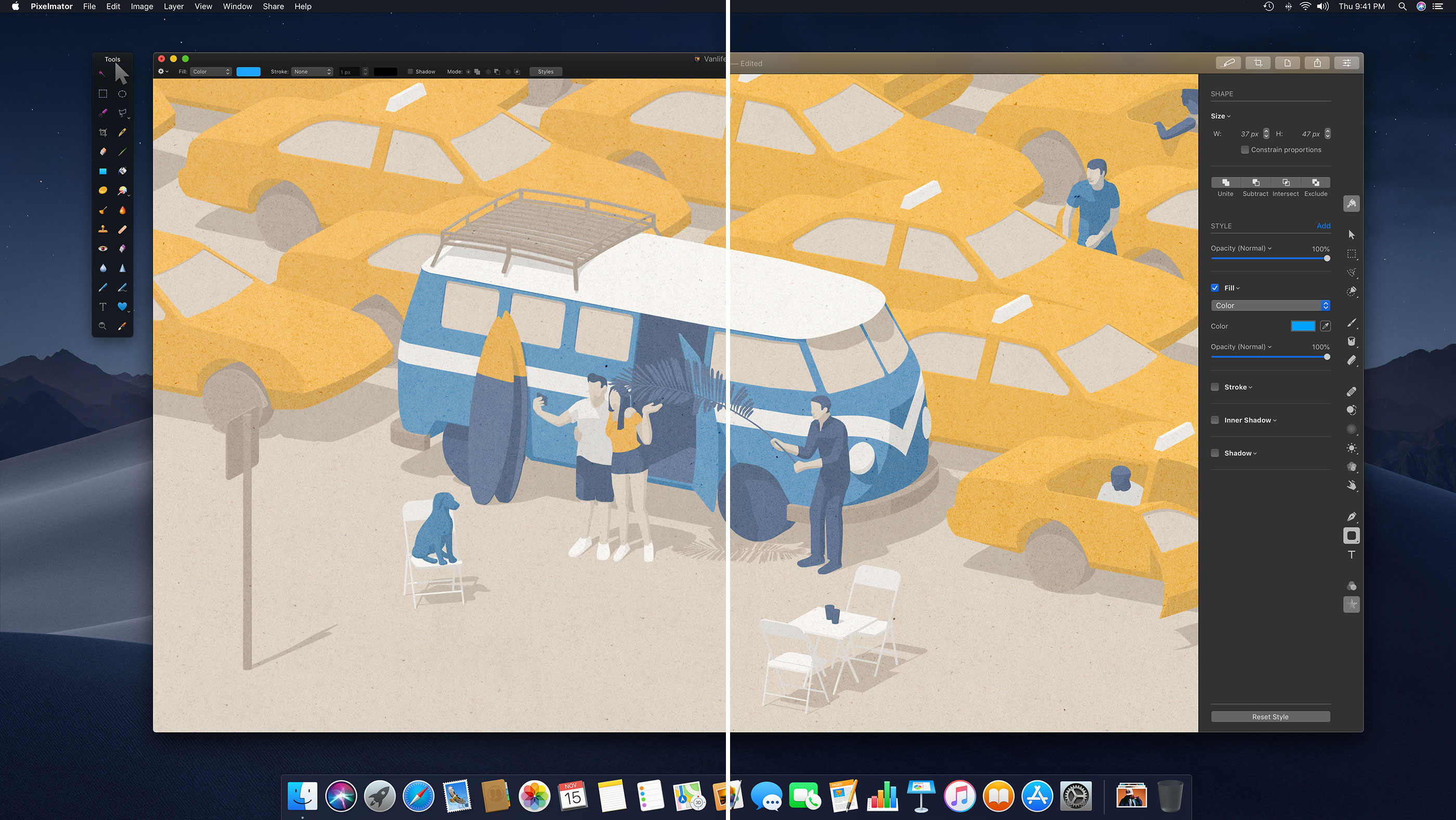 Same idea, new approach
Possibly the most important thing to start with is not a difference, but a similarity. The idea inspiring Pixelmator Pro is exactly the same as the idea behind the original Pixelmator. Making powerful but complex pro image editing tools easy to use and accessible to everyone. Even your grandparents. Pixelmator Pro is not a ‘professional’ version and Pixelmator is not an ‘entry-level’ version. Both apps are focused around time-tested image editing tools (and some innovative new ones).

So if both apps are inspired by the same kind of thinking (the Pixelmator philosophy), how come they’re different? With Pixelmator Pro, we wanted to be more true to ourselves and more trusting of our own intuition instead of relying on established approaches. Pixelmator Pro is the realization of that vision — a new approach to the same idea.

The future of Pixelmator
The original Pixelmator has been in development for almost 12 years. While it’s a fantastic image editing app, without a complete rewrite, we’d be much more constrained about the new features we could bring to it. In software development, you sometimes reach a point where you have to start from scratch to make sure you’re equipped to face the future. We now know a lot more than we did when we started and we put that knowledge to good use with Pixelmator Pro. It has a very solid foundation on which we can build without reaching roadblocks. So another difference between the two apps is that Pixelmator Pro is the new Pixelmator and most certainly the future.

Features, features, features
Alright, that touched upon some theoretical things and a little bit of history, but the most important things are features, right? So what’s actually new in Pixelmator Pro? Well, one thing that’s changed is everything (ha ha). Everything has been rewritten from scratch to be faster and work more reliably. You won’t notice that in the screenshots, but it’ll become immediately obvious once you start using the app.

As for actual features, all the things mentioned below are new to Pixelmator Pro.

• Pixelmator Pro has a completely new design — it has a single-window, fully Mac-native interface. Layers are now on the left, tools on the right, and the overall workflow is much more user-centered. We’ve also added a beautiful light appearance, which was an often-requested feature with the original Pixelmator. There are smaller (but equally awesome) things as well, like the ability to completely hide the interface, intelligent auto-centering (and the ability to scroll beyond the edges of the canvas), a redesigned photo browser, and more. We also have a whole bunch of plans for improving the interface and workflow of Pixelmator Pro and having a completely new design opens up some very exciting possibilities. Things are only going to get better.

• Resizing in Pixelmator Pro is nondestructive (so if you scale something down and decide to scale it back up later, you won’t lose quality). It’s one of those things you might not really notice at first, but once you get used to it, you’ll wonder how you ever lived without it. We’ve added completely new alignment and distribution tools to make it easier to even out the spacing between objects. The Layers sidebar has two different views — Thumbnails and List — which you can choose between based on whether you like more text or image-based layer organization. And the Core ML-powered automatic layer naming feature automatically detects the contents of images you add and gives descriptive names to your layers. All great features new to Pixelmator Pro.

• The color adjustments have been conceived and built from scratch — they’re nondestructive and intelligently preserve color detail. There’s full RAW support, RAW layers, a live histogram (three, in fact!), plus you can save combinations of adjustments as presets, share them, and use them for batch processing. Oh, you can also enhance your photos using the most intelligent auto-enhance tool out there (powered by machine learning, naturally). Is that it? No, there’s more, but I’m running out of space…

• The effects are nondestructive. There are new effects, like Box, Disc, and Spin blurs, a Bokeh filter, as well as new Image and Pattern fills. You can save combinations of effects as presets, share them, use any effect or combination of effects for batch processing, and easily copy effects from layer to layer. All things the original Pixelmator doesn’t have.

More, more, more
That covers much less than half of what’s new in Pixelmator Pro. Some other highlight features include a much more powerful Export for Web tool, which includes support for exporting images at multiple scale factors, advanced PNG compression, export presets, and a Quick Export feature. The vector tools have been redesigned so it’s much easier to combine multiple paths into shapes and work on them. Oh, there’s SVG support too! The Reshaping tools preserve image quality and sharpness much better and work faster. Live blending mode previews make it easier to pick and choose how to blend your layers.

And, of course, that’s still not everything. But that should give you a good idea about what to expect. If you use the original Pixelmator for editing your photos, there’s a whole range of awesome additions for you in Pixelmator Pro. If you use it for painting, ditto. If you use it for social media imagery for your business, YouTube thumbnails, UI designs, layouts, anything at all, really, you’re sure to find some great new features to love. And if you find something you’d like to us to improve, we’re always listening. Over the past 11 months, we’ve added so much to Pixelmator Pro already and we have no plans to slow down.

One more thing…
The price. After almost a year at $59.99, we can say that this wasn’t the right price. Obviously, we had somewhat different plans for pricing when we launched and we could leave things as they are, try to power through, but if things aren’t working, you need to change them. Today, as we’re (finally) ending our sale, Pixelmator Pro will now be sold for $39.99.

Deciding on a price for your app is a weird and wonderful thing. Despite what some people may think, it’s not motivated by greed (at least not for us). In fact, it’s mostly common knowledge that profits don’t change too much depending on your price (that’s all down to shipping good updates and continuously improving your app). A higher price results in lower sales and a lower price in higher sales, so everything evens out in the end. Essentially, the price often acts as a filter.

We want people who see things the way that we do to become our users and to shape the future of Pixelmator Pro. And that’s where this new price comes in. So if you’re currently using the original Pixelmator, give Pixelmator Pro a try — we’ve got a completely free 30-day trial that you can use with no restrictions. And we hope you’ll join us in making Pixelmator Pro the kind of dream app we all want it to be.
1

i hope Pixelmator Pro has someone i can speak too. i ordered the app and had it refunded without my knowledge. why? i just used it the one time and was getting the hang of it. then poof! it's gone. this was several months ago. i still have the app but it is useless without the receipt of payment. i haven't used it since. i can no longer use it.
could someone let me know what happened and how do i fix it? do i get the Canadian version (expensive or the reasonably priced version?)
this was to take the place of the fantastic Adobe Creative Cloud editing tools. with iCloud storage, it just gets too expensive.

thank you so much for your consideration to this request.

Hey Ali, we definitely didn't have anything to do with this (since we don't have access to the sales/refunds part of the App Store). But, it would be great if you could email us at our support address (support@pixelmator.com) and we'll do our best to help in any way we can.
0

by Andrius 2018-11-26 16:00:42 Hey Ali, we definitely didn't have anything to do with this (since we don't have access to the sales/refunds part of the App Store). But, it would be great if you could email us at our support address (<a href="mailto:support@pixelmator.com">support@pixelmator.com</a>) and we'll do our best to help in any way we can.

I would love to run Pixelmator Pro but it needs Metal-support. Is there anyway to bypass that support requirement – or does it actually need that.
0

The app does actually need Metal support as it relies on it for the zooming and panning, painting engine, color adjustments, effects, pretty much, everything actually!
0

Thanks for this article and the honesty in it. Although I paid the 59 bucks at the start I thought 39 is the right price but I am very happy with the app and his development that the extra money I spend was very well invested. I am not regretting it at all.
0

Thanks alot for this article!
I hope that I'll not regret to use the Pixelmator.
I'll use it in my job for the future.
I'd like to share with you information about new ideas of photo manipulation, photo editing and so on. If you have free time check the link please.
http://fixthephoto.com/blog/retouch-tip ... oshop.html

No problem, feel free to post on the forum if you have any questions about using the app or have any feedback at all!
0

I'd like to know why on the recent update I can't see the "stroke" and "shadow" options anymore. I've been stressing out trying to find it and idk maybe I'm stupid but it's not there anymore lol
0

Also another change that annoys me is that clicking on the shapes doesn't select them anymore unless you click on the layers list. Kinda bugged about that.
0

Is auto-select off? Right click on canvas to check.
0

Once you have upgrade to Pro, can (or should) you delete the old app?
0

You can, but you don't have to. There's no spcecific reason to keep it, but the two apps shouldn't interfere with each other either.
0